Please choose your country or region:

Japan held a closely-watched Upper House election on 10 July, just two days after the assassination of former prime minister Shinzo Abe sent shockwaves through the country. The Kishida-led ruling Liberal Democratic Party (LDP) and coalition partner Komeito won by a landslide, with the coalition taking 146, or 59%, of the Upper House’s 248 seats (Chart 1). The Upper House election win made the LDP-Komeito the dominant force in both houses of parliament, with the coalition already a majority in the Lower House. Without another national election for the next three years, Kishida had been expected to pursue his policies relatively free from political distractions.

Chart 1: The ruling coalition controls 59% of the Upper House 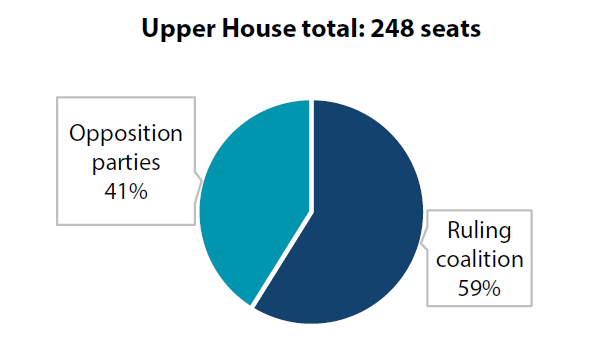 However, Kishida quickly ran into challenges as the assassination of Abe forced the prime minister to make some difficult decisions. Kishida opted to give Abe, Japan’s longest-serving prime minister, a state funeral. Japan had not bestowed such an honour to a former prime minister since 1967, and Kishida’s decision divided public opinion. Calls were made for the ceremony to be scrapped, with those opposed citing the funeral’s seeming lack of a legal basis and the considerable burden it would impose on taxpayers. In what was seen as an attempt to unite the LDP, Kishida went through with the state funeral in September; his cabinet’s approval rating has steadily declined since (Chart 2). 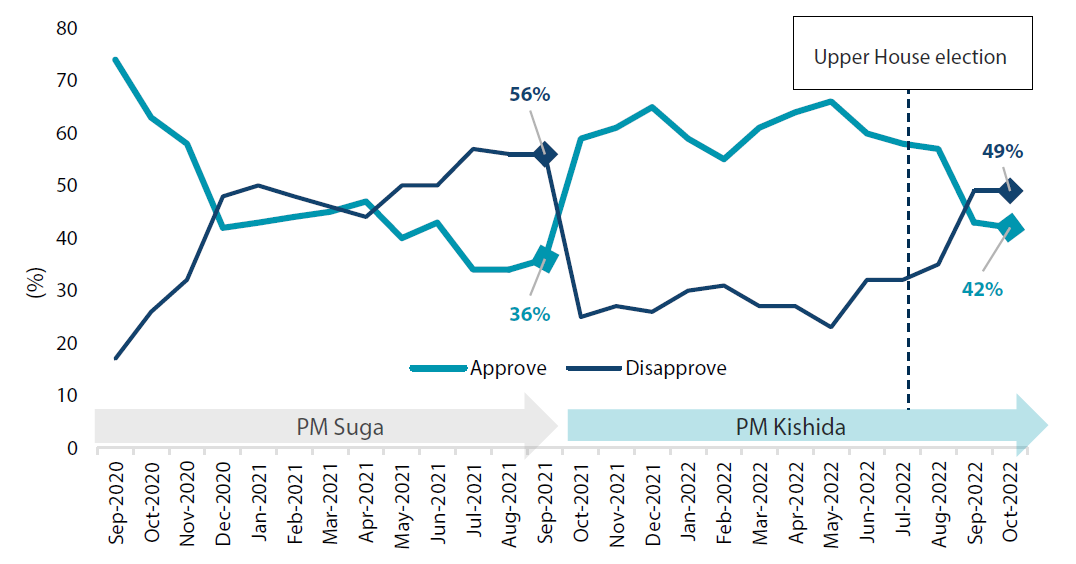 However, we do not expect Kishida’s sagging approval ratings to cause major disruptions in Japanese politics as the opposition parties are divided while the ruling coalition has retained a unified front. With the Upper House election and Abe’s state funeral behind him, Kishida is expected to focus on economic policies to revive public support.

At a speech at the New York Stock Exchange in September, Kishida called for more foreign investment into Japan while declaring that the country’s economy will continue to show strong growth. The prime minister advertised his “five priorities” for Japan (Chart 3), a series of policy measures aimed at reinforcing economic growth by focusing on people, innovation, green transformation (GX), doubling income from assets and the global economy.

Of the five priorities, measures aimed at the global economy and more specifically the relaxing of borders is likely to have the most immediate impact by providing a quick boost to aggregate demand. With the latest wave of the COVID-19 Omicron variant having peaked out in Japan amid an acceleration in the number of vaccine booster shots, the country relaxed its border measures after having effectively closed itself off from the rest of the world at the height of the pandemic. Among G-7 countries, Japan has the highest number of boosters administered per 100 people (Chart 4). 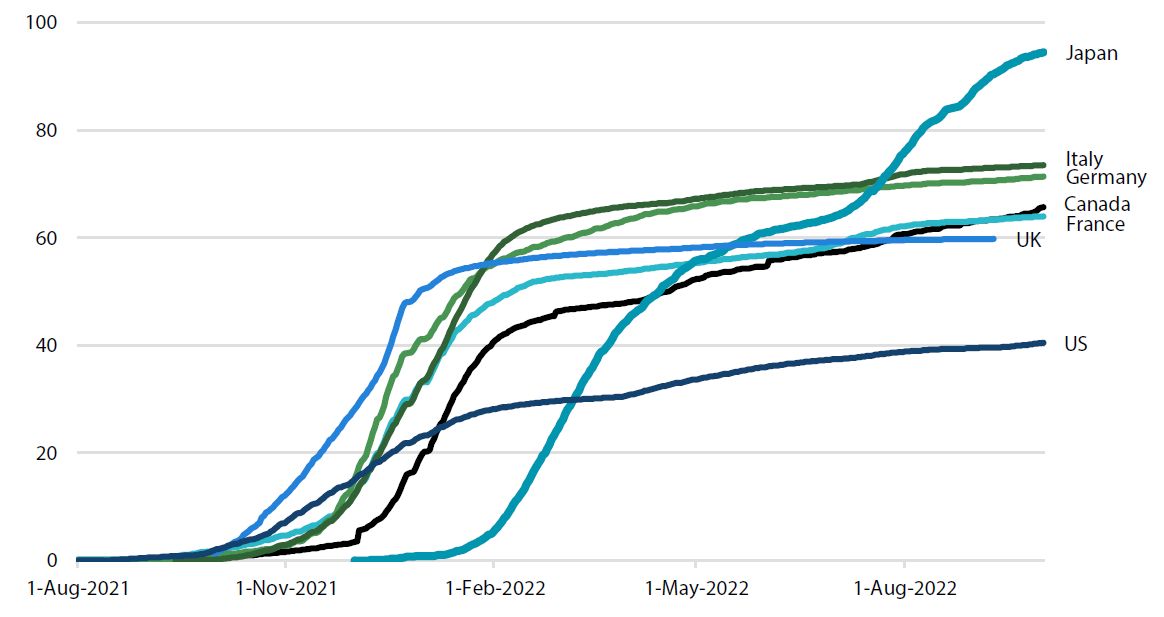 With public support for further opening increasing on the back of declining coronavirus cases, the government reinstated visa-free visits and lifted the daily arrival cap on the number of visitors from 11 October (Chart 5). COVID-19 testing and quarantine requirements were also scrapped. The reopening of Japan is intended to “feed two birds with one scone” as it has the potential to simultaneously shore up Kishida’s approval rating and stimulate the economy by boosting consumer spending.

What a recovery in inbound tourism could look like

Inbound tourism is set to show a significant recovery as Japan remains a popular travel destination. Although the country was effectively closed to tourists, Japan still manged to top the 2021 World Economic Forum’s (WEF) Travel & Tourism Development Index, edging out the US, Spain and France. Japan was already a popular destination prior to the pandemic and the WEF ranking indicates that inbound tourism could not only return to pre-pandemic levels but experience steady, record-breaking growth again (Japan welcomed a record 31.9 million visitors in 2019 according to the Japan National Tourism Organization). There is also plenty of headroom for a sharp recovery; according to the World Tourism Organization (UNWTO), Japan experienced one of the largest drops in international tourist arrivals in the wake of the pandemic (Chart 6). 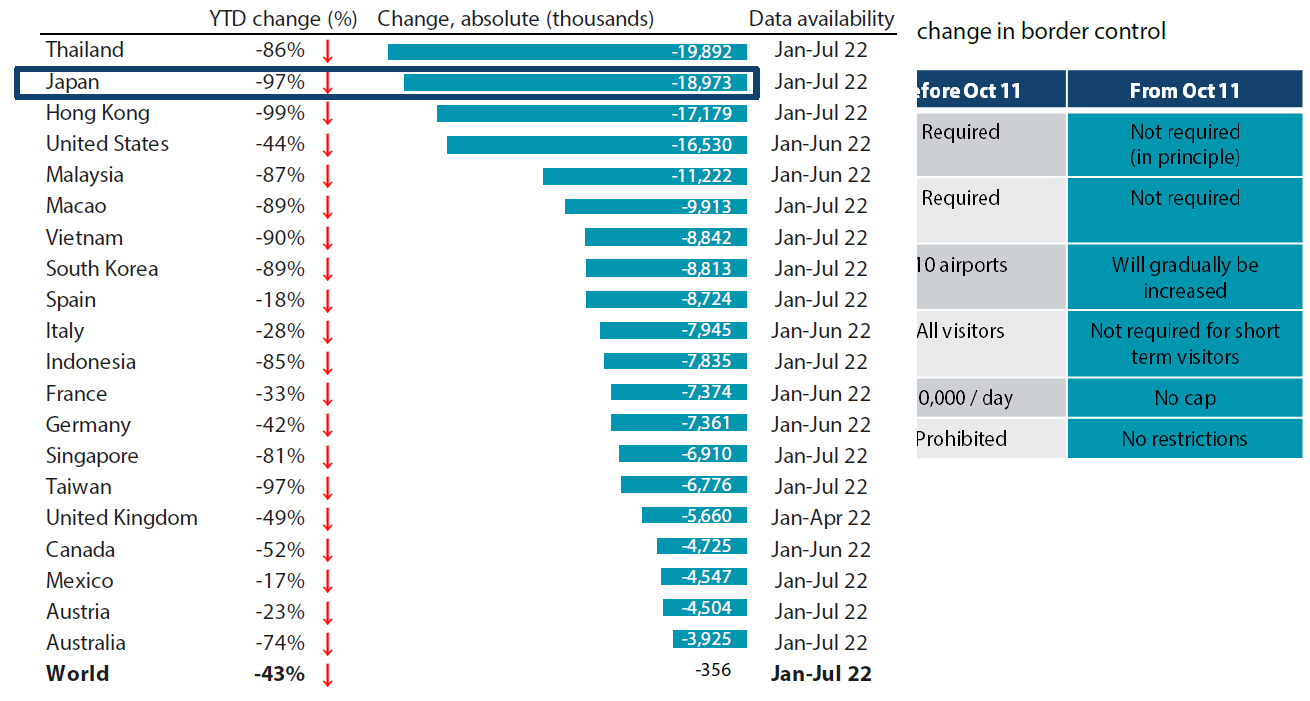 The yen fell to a 32-year low versus the dollar in October, having lost about 25% against the US currency since the end of 2019. Demand for yen by tourists could also help stabilise the currency, which has recently experienced a significant amount of market volatility. While the weak yen could provide an incentive for tourists to return to Japan in the short term, Japan is likely to benefit significantly from a further influx of visitors in the longer term when China does finally relax its outbound travel restrictions.

The OECD’s latest economic outlook highlights Japan’s resilience within the global economy (Chart 8). Factors supporting the Japanese economy relative to its US and euro area peers include firm consumer confidence thanks to still relatively low levels of inflation. Consumer prices have climbed steadily in Japan but the rise has been limited when compared with those of other developed economies. Furthermore, Kishida’s government unveiled a JPY 29.1 trillion (USD 196 billion) economic package late in October designed to help households cope with rising prices and allow the economy recover from the effects of the pandemic. When foreign visitors return to Japan, they will be reinforcing an already steady Japanese economy.

Chart 8: OECD’s real GDP outlook for Japan, US and the euro area

This document is prepared by Nikko Asset Management Co., Ltd. and/or its affiliates (Nikko AM) and is for distribution only under such circumstances as may be permitted by applicable laws. This document does not constitute investment advice or a personal recommendation and it does not consider in any way the suitability or appropriateness of the subject matter for the individual circumstances of any recipient.

This document is for information purposes only and is not intended to be an offer, or a solicitation of an offer, to buy or sell any investments or participate in any trading strategy. Moreover, the information in this material will not affect Nikko AM’s investment strategy in any way. The information and opinions in this document have been derived from or reached from sources believed in good faith to be reliable but have not been independently verified. Nikko AM makes no guarantee, representation or warranty, express or implied, and accepts no responsibility or liability for the accuracy or completeness of this document. No reliance should be placed on any assumptions, forecasts, projections, estimates or prospects contained within this document. This document should not be regarded by recipients as a substitute for the exercise of their own judgment. Opinions stated in this document may change without notice.

In any investment, past performance is neither an indication nor a guarantee of future performance and a loss of capital may occur. Estimates of future performance are based on assumptions that may not be realised. Investors should be able to withstand the loss of any principal investment. The mention of individual stocks, sectors, regions or countries within this document does not imply a recommendation to buy or sell.

Nikko AM accepts no liability whatsoever for any loss or damage of any kind arising out of the use of all or any part of this document, provided that nothing herein excludes or restricts any liability of Nikko AM under applicable regulatory rules or requirements.

All information contained in this document is solely for the attention and use of the intended recipients. Any use beyond that intended by Nikko AM is strictly prohibited.

Japan: The information contained in this document pertaining specifically to the investment products is not directed at persons in Japan nor is it intended for distribution to persons in Japan. Registration Number: Director of the Kanto Local Finance Bureau (Financial Instruments firms) No. 368 Member Associations: The Investment Trusts Association, Japan/Japan Investment Advisers Association/Japan Securities Dealers Association.

This document is communicated by Nikko Asset Management Europe Ltd, which is authorised and regulated in the United Kingdom by the FCA (122084). It is directed only at (a) investment professionals falling within article 19 of the Financial Services and Markets Act 2000 (Financial Promotions) Order 2005, (as amended) (the Order) (b) certain high net worth entities within the meaning of article 49 of the Order and (c) persons to whom this document may otherwise lawfully be communicated (all such persons being referred to as relevant persons) and is only available to such persons and any investment activity to which it relates will only be engaged in with such persons.

United States: This document is for information purposes only and is not intended to be an offer, or a solicitation of an offer, to buy or sell any investments. This document should not be regarded as investment advice. This document may not be duplicated, quoted, discussed or otherwise shared without prior consent. Any offering or distribution of a Fund in the United States may only be conducted via a licensed and registered broker-dealer or a duly qualified entity.

Singapore: This document is for information only with no consideration given to the specific investment objective, financial situation and particular needs of any specific person. You should seek advice from a financial adviser before making any investment. In the event that you choose not to do so, you should consider whether the investment selected is suitable for you.

Hong Kong: This document is for information only with no consideration given to the specific investment objective, financial situation and particular needs of any specific person. You should seek advice from a financial adviser before making any investment. In the event that you choose not to do so, you should consider whether the investment selected is suitable for you. The contents of this document have not been reviewed by the Securities and Futures Commission or any regulatory authority in Hong Kong.

Australia: Nikko AM Limited ABN 99 003 376 252 (Nikko AM Australia) is responsible for the distribution of this information in Australia. Nikko AM Australia holds Australian Financial Services Licence No. 237563 and is part of the Nikko AM Group. This material and any offer to provide financial services are for information purposes only. This material does not take into account the objectives, financial situation or needs of any individual and is not intended to constitute personal advice, nor can it be relied upon as such. This material is intended for, and can only be provided and made available to, persons who are regarded as Wholesale Clients for the purposes of section 761G of the Corporations Act 2001 (Cth) and must not be made available or passed on to persons who are regarded as Retail Clients for the purposes of this Act. If you are in any doubt about any of the contents, you should obtain independent professional advice.

This material is for the use of researchers, financial advisers and wholesale investors (in accordance with Schedule 1, Clause 3 of the Financial Markets Conduct Act 2013 in New Zealand). This material has been prepared without taking into account a potential investor’s objectives, financial situation or needs and is not intended to constitute personal financial advice, and must not be relied on as such. Recipients of this material, who are not wholesale investors, or the named client, or their duly appointed agent, should consult an Authorised Financial Adviser and the relevant Product Disclosure Statement or Fund Fact Sheet (available on our website www.nikkoam.co.nz ).

• Important disclaimer information
Please note that much of the content which appears on this page is intended for the use of professional investors only.